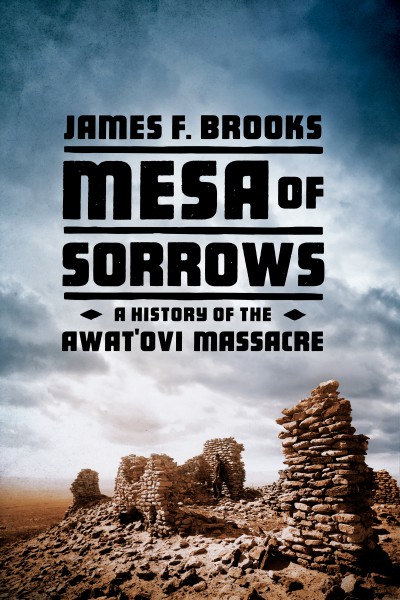 "Mesa of Sorrows: A History of the Awat'ovi Massacre" book cover

“Just before a chilly dawn in the autumn of 1700, shadowy figures slipped into the Hopi town of Awat’ovi through a gate that could only have been left unguarded by one of its own citizens. The invaders proceeded to kill most of the adults they found, thrusting burning torches and crushed red peppers into the kivas—underground ceremonial chambers—where the men and boys had spent the night in religious celebration. Young women and children were claimed as booty, but the attackers quarreled about who would get whom, until fury prompted them to mutilate and kill scores of their captives. A few of the women managed to survive by promising to share their arts of rainmaking. By noon, Awat’ovi, a centuries-old community once home to about 800 people, was emptied. It has never been occupied since. Eric Polingyouma, of the Hopi Nation’s Bluebird Clan, once told a 20th-century archaeologist that the ruins have been “considered an evil place. No one at Hopi claims it.”