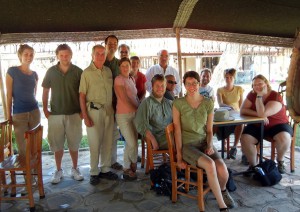 The photo above shows UCSB ancient history faculty and graduate students with Mr. Özcan Işık, the mayor of Belevi, Turkey, during the 2011 Ephesos research workshop.

The History Department’s graduate field in Ancient History combines rigorous, multidisciplinary research training with thorough preparation for classroom teaching.  Graduate students receive training in historical methods and the handling of evidence, along with solid language preparation.  We offer a cohesive, supportive scholarly community where students are treated as colleagues-in-training.

Our program keeps specific requirements to a minimum in order to allow students maximum flexibility in designing (in consultation with their advisors) the course of study that best suits their needs and interests. Particular emphasis is given to making theoretical and comparative connections with other fields of history and related disciplines.

Anthony Barbieri-Low has wide-ranging interests in many aspects of Early China, including technology, organization of production, labor history, gender and social relations, legal process, visual and material culture, and state formation. He also conducts research in Egyptology as a comparative field with early China.

Elizabeth Digeser is interested in processes of transformation (political, religious, economic) in Late Antiquity (3rd-5th C.E.). Her current research explores the role of patronage and propaganda in consolidating the emperor Constantine’s hold on power. She is particularly interested in methodologies that integrate material culture with textual evidence as well as the reception of late ancient ideologies.

John W.I. Lee studies the history of ancient West Asia, especially war, society, and culture in the Greek and Achaemenid world from ca. 650-330 BC.  He also studies receptions, interpretations, and representations of antiquity in the United States, especially amongst African American classical scholars.  He is the author of A Greek Army on the March: Soldiers and Survival in Xenophon’s Anabasis (2008); The Persian Empire (2012); and The First Black Archaeologist: A Life of John Wesley Gilbert (2022).

Brice Erickson (Classics) is a specialist in Greek archaeology, ceramic analysis, and Archaic and Classical Crete.

Rose MacLean (Classics) is a specialist in Roman cultural history.

Robert Morstein-Marx (Classics) specializes in Roman history from the Middle Republic to the Early Empire.

Claudia Moser (History of Art & Architecture) focuses on the material culture and archaeology of Roman religion,

Stuart Smith (Anthropology) focuses on the history and archaeology of ancient Egypt. 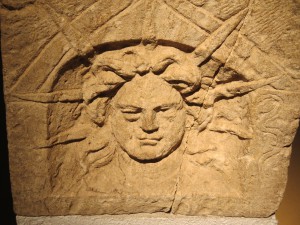 Relief of Apollo from Lyon. Learn more about Apollo and the emperor in HIST 112C: Disaster & Reform (3-4C CE).

Students who wish to pursue graduate training in Ancient History should first contact the particular faculty member whose specialty best matches their interests.  We encourage all potential graduate applicants to contact us by email to discuss their research interests and professional goals BEFORE submitting a formal application for graduate study in our program.

The History Department is a member of the interdisciplinary Ancient Mediterranean Studies PhD Emphasis or AMS. AMS is not a separate degree-granting program, but offers a course of study enabling graduate students to bridge the traditional disciplinary borders that sometimes divide scholars who study the ancient Mediterranean world. AMS embraces faculty and students from the departments of Anthropology, Art History & Architecture, Classics, History, Philosophy, and Religious Studies.

What kinds of professional goals are most consistent with your program?
We train research scholars who are also outstanding teachers. If you see yourself as a faculty member in a History Department, writing scholarly articles and books, teaching World History or Western Civilization surveys in addition to Greek and/or Roman history courses, and interacting with historians of diverse periods and fields, then our program is suitable for you.

How much preparation in Ancient History do I need?
Applicants must meet the general requirements for admission to the History Department’s M.A./Ph.D. program. They should be familiar with the narrative framework of Greek and Roman history (for example, through completing upper-division undergraduate course work in ancient history), and have taken at least one seminar course requiring the research and writing of a long analytical paper.

How much language preparation should I have?
Applicants should have at least three years of coursework in either classical Greek or Latin, along with reading knowledge of at least one modern foreign language. All students must pass Greek and Latin translation exams, as well as translation exams in two modern foreign languages (usually French and German).