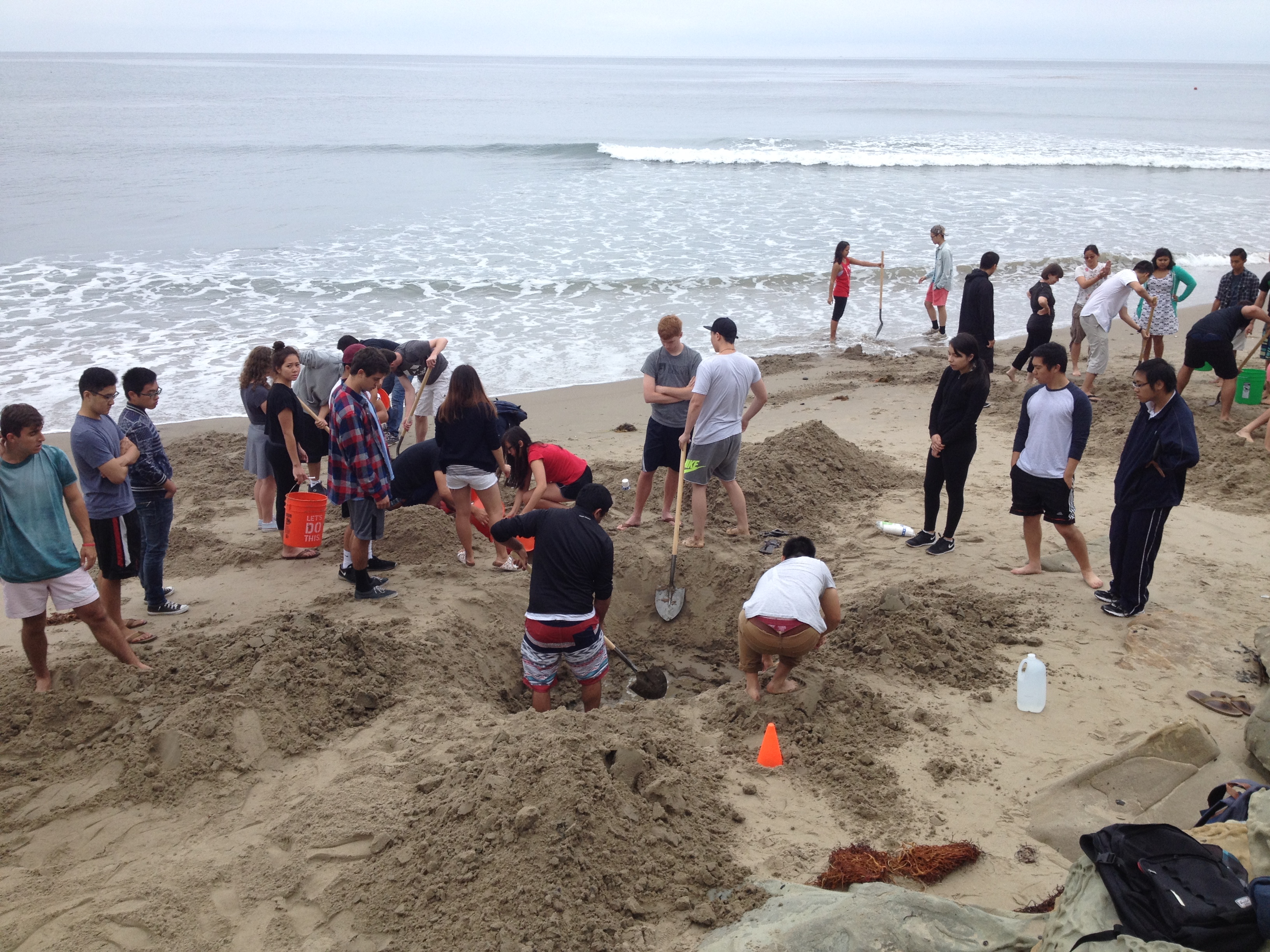 While teaching World History (History 2A) during the last few years, I have been experimenting with various historical games or simulations that might make the study of the ancient world more memorable. Some of these ideas were originated by my TA’s during our History 500 (TA workshop) sessions, and others I brainstormed over of last couple years by myself or with my students. While teaching History 2A this summer, I decided to try a whole series of these experiments in conjunction with a “flipped classroom,” in which I placed half of my traditional lectures online as podcasts, freeing up additional classroom time for discussion and experiment. 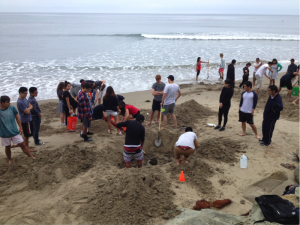 In our first exercise this summer, I wanted to test Karl Wittfogel’s theory that the need to organize labor to build and maintain large-scale irrigation works would lead to hierarchical power structures (i.e. “despotic leadership”), as seen in the early states of Mesopotamia, Egypt, and China. I brought the class down to Campus Point beach and divided them into two teams. Each team of 30 students was given only five buckets and five shovels, and told to dig a pit either 6, 9, or 12 feet in diameter, fifteen feet from the water. Whichever team moved the most water from the ocean to their storage tank in one hour, would be the “winner.” I gave them no guidelines on how they were to achieve this or how they were to organize themselves. The teams quickly organized and leaders did emerge to take control. While some teams experimented with more collaborative or “democratic” labor organization schemes, eventually one or two outspoken males began to dominate and tell the group what needed to be done. The groups also conducted espionage on each other to see if they could obtain intelligence about better methods. After failed attempts to dig a canal from the ocean to their storage tanks, both groups settled on a bucket brigade to move the water most efficiently. The 9ft diameter pool of the winning team went to a depth of 19 inches, which totaled 753 gallons of seawater, weighing 6475 lbs. (!). 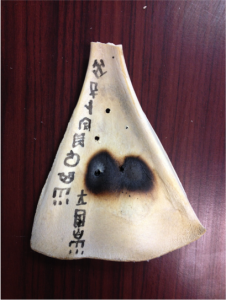 A successful oracle bone divination conducted by Professor Barbieri-Low and his History 2A students.

Another exercise sought a way to bring the material culture of the ancient world into the student’s hands and to make it real. I decided to focus on writing and writing materials in ancient China and Egypt. In one activity, the students worked to make their own sheet of papyrus, pressing together individual strips with a clamp, while they also practiced writing a particular phrase (a ritual offering) in the calligraphic Egyptian script called hieratic. The other activity asked the students to prepare a cattle scapula for a divination about rain, an important ritual performed by the kings of bronze age China around 1200 BCE. Working in pairs, the students sawed, sanded, and drilled the bone to prepare it for the divination charge. They also practiced writing in oracle-bone script, the earliest known form of Chinese, so that they could later inscribe their bone with the divination record. Once the bone was prepared, we heated the bone with a flame and cracks appeared on the surface and a loud sound was heard. The students interpreted this as a positive divination response that it would rain in the next ten days. Some students later reported to me that their bikes were wet when they found them the next morning, and attributed this minor rain event to our divination, which I had informed them was not just a question of the gods and ancestors, but also a charge to make a favorable event actually come about.

Some of the other activities we experimented with this summer included composing impromptu epic poetry about the victory or defeat in the beach exercise, to understand how Greek bards composed poems like the Iliad and the Odyssey; holding a mock trial in a Babylonian law court to better understand how Hammurabi’s Code functioned and its legal principles; and conducting a Chinese court debate between Daoist, Legalist, and Confucian advisors on how to solve the problems of the empire. Though I had tried some of these exercises individually before, orchestrating all within the same term really made the course material come alive for some students, who reported to me that this was the most memorable class of their entire time here at UCSB, and nothing like any history class they had ever taken. I can say that it was one of the most exciting and rewarding experiences I have had as a history teacher as well. Conducting such experiments is labor intensive and time consuming, but the reward for the teacher and for the engaged student is truly worth it.

Previous Post:
New Deal, New Look: A Conference at UCSB Re-Examines the Impact and Legacy of the New Deal
Next Post:
Seikaly and Colleagues on Palestine and Black America