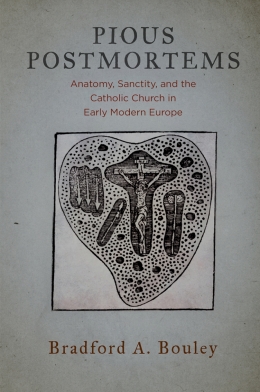 Professor Bouley’s Pious Postmortems: Anatomy, Sanctity and the Catholic Church in Early Modern Europe explores the complex connection between the spiritual and physical realms in Catholicism by exploring the widespread practice of using autopsies in determining sainthood in the sixteenth and seventeenth centuries. The book, which was featured in the UCSB Current, considers the dozens of examinations performed on reputedly holy corpses in the sixteenth and seventeenth centuries at the request of the Catholic Church. Contemporary theologians, physicians, and laymen believed that normal human bodies were anatomically different from those of both very holy and very sinful individuals. Attempting to demonstrate the reality of miracles in the bodies of its saints, the Church introduced expert testimony from medical practitioners and increased the role granted to university-trained physicians in the search for signs of sanctity such as in corruption. The practitioners and physicians engaged in these postmortem examinations to further their study of human anatomy and irregularity in nature, even if their judgments regarding the viability of the miraculous may have been compromised by political expediency. Tracing the complicated relationship between the Catholic Church and medicine, Professor Bouley concludes that neither religious nor scientific truths were self-evident but rather negotiated through a complex array of local and broader interests.