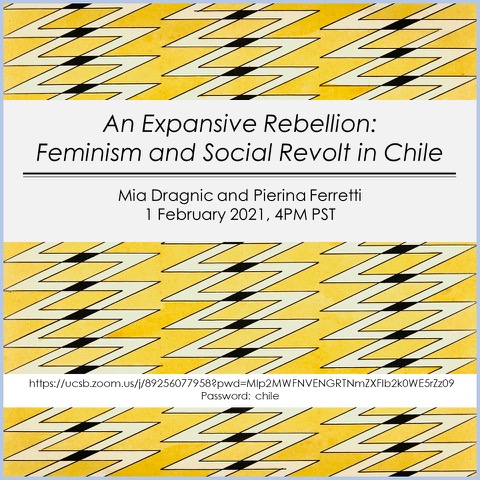 UCSB and UCSD have joined together to welcome Pierina Ferretti and Mia Dragnic García, sociologists and doctoral candidates in Latin American Studies at the University of Chile.

In October 2019, Chile experienced its largest social revolt since the return to democracy in 1990. The mobilization, which began as a spontaneous reaction to protest against a 0.30 USD rise in the Santiago transport fare, soon after became a widespread outburst against the precarious and unjust conditions that affect the majority of the population after almost fifty years of life under a neoliberal regime. Throughout Chile, high school and university students, young precarious professionals, residents of peripheral neighborhoods, sectors of a fragile and unstable “middle class”, soccer hooligans (a symbol of popular and stigmatized youth), qualified salaried workers and unqualified, retirees and older adults, office workers, and app workers, among others, joined together in mass demonstrations.

As an immediate antecedent to this revolt in Chile, there had been a recent emergence of a new wave of the feminist movement that has since caused a general awareness of sexist violence, sexual abuse, and the need for an abortion law, issues that today they occupy the center of social debate. One can see the underground work that Chilean feminism has carried out for many years and that has gained symbolic capital – this is key to understanding how it has moved from private malaise to collective revolt today. Feminism has acted in Chile as an expansive rebellion, starting with women and sexual dissidents and has advanced towards the politicization of broad social sectors, preparing the conditions for mass revolt.

This event is part of the Feminismos desde abajo, y hacia el sur/ Feminisms from Below, and Toward the South series. This speaker series welcomes feminist militants from Latin America to share their perspectives and experiences on building popular power towards a mass feminist movement. Over the past decade, Latin American feminists have identified manifestations of gender-based oppression under capitalism in everyday women’s conditions in order to successfully mobilize them as part of a political movement. Feminists produce analyses and subsequent strategies around reproductive rights, resource extractivism, housing, debt, and more. This mass feminism has grown to be arguably the most insurgent political force across the continent.