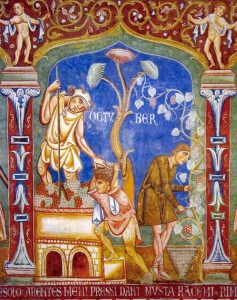 Recent research, discoveries and restorations are dramatically changing how scholars view medieval Rome. The city was hardly the artistic and cultural backwater we had imagined: instead, as Julian Gardner writes, it was a crucible for the arts.  This talk will set out some of those finds.  The Aula Gotica frescoes are just one fascinating example. In the 1240s a cardinal constructed a Gothic palace attached to a convent, with a grand reception hall decorated with innovative secular paintings of extraordinary quality. The Virtues are personified by monumental women dressed in helmets and chain mail, each with a virtuous figure perched on her shoulder and the corresponding vice under her feet. The months are depicted with beautifully composed scenes of seasonal labors. Because the paintings were plastered over in the early fourteenth century and only discovered and restored in the last few decades, the bright color and elegant brushwork survives. They should lead to a reevaluation of the narrative of early Renaissance painting.

Carol Lansing is a historian of medieval Italy who is currently researching elite culture in southern Lazio.