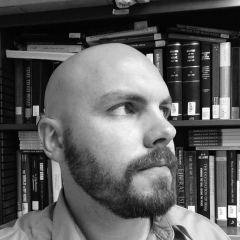 I study the history of the modern Middle East, particularly the social and political history of Iran from roughly 1500 A.D. to the present. My research interests include the various expressions of modern Islamic political thought, the political and social role of Shi’a Islam in the modern Middle East, and the role of religious elites in political dissidence in the Middle East and the world more generally. I’m fascinated by the continuing role of religion in shaping the social and political consciousness and identity of various societies, both inside and outside of the Middle East, and religion’s intersection and competition with modern ideologies such as nationalism, socialism, etc.

My current research project focuses on the Iranian practice of bast-nashini/nashastan from the establishment of the Safavid Dynasty in 1501 until the Iranian Revolution of 1979. Comparable to the Medieval European practice of taking sanctuary from political authority, the changing role of bast in Iranian society reflected evolving relationships between society and various, often competing, systems of authority. Understanding how these various systems of authority intersected at these locations provide insight into social and political change in Iran as well as changing societal perceptions of legitimate and illegitimate authority.